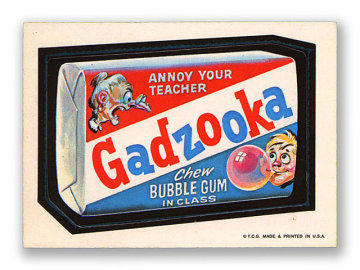 At the age of 10 my Dad decided that it was time for me to get a paper route.  I mean I was in 4th grade, so why not give a child of one whole decade on this earth a job which required 7 days of work for 365 days a year.  Sure no one else has a job that you are responsible doing every day, including holidays, but hey, with a generous pay package of 15 dollars a week, who wouldn't want that for their child?

Oh, did I mention that my Dad lied about my age because you were required to be 12 years old to get the prestigious gig?  Fortunately for me, I had that Greg Oden disease where I looked older than my age.  Remember the kid who could grow an Abe Lincoln beard at 10?  Remember the kid who you noticed in the locker room having pubes at 8?  That would have been me, so my Dad knew I was in the clear.  I guess he felt he deserved such luck considering that he got dirty stares claiming I was younger than I was when it would help him pay less at the movie theatre.  (He didn't have the same problem at drive-in movies because he would make me get into the trunk until we got through the gate.)

So I'm delivering the Des Moines Tribune, the afternoon version of the Register. (Yes youngsters, there used to be an afternoon edition in every major city in the country.)  After school, I would ride my bike to the area they dropped my bundle off at, then I would stick the papers in the newspaper bag I tied to my handlebars.  Since the route was more than a mile away, I would ride my bike anytime it was possible and sometimes even when it wasn't.  Snowfall wasn't a problem, as long as the streets were plowed.

When I was 12, I can remember getting a moped for Xmas.  At the time, it was kind of the rage, so on one-hand it was thrill seeing it on Xmas morning.  The other hand was that I knew that a gift of this quality meant indentured servitude to my Dad for the rest of the year.  consider that your allowance.  He ended up driving the moped as much as me to work 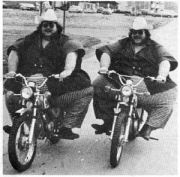 Don't think that this was a Honda moped, my Dad was far too cheap to go that direction.  This was an AMC moped.

(AMC were the people that brought you the ugliest cars in automobile history.) The engine was made by McCulloch, the chain saw people.  To get it started, you had to pedal it like a bicycle and then pull the lever that sat above the rear wheel to get the moped part happening.  I was told this was a perfect solution for getting around the town ordinance of having to be 14 years old to drive one.  Hey, I was happy to have the thing overall, though I did wipe out quite a few times on it, since I would drive it on days where there was enough ice that only a Zamboni moped was safe.  (For those of you interested, this beauty of a ride died less than a year after getting it because a certain fat-ass rode it to work too often.)

For those of you that never had a paper route, one of the most amazing parts of doing the gig was that you had to collect your money from your customers.  For some reason, the electric company or Ma Bell didn't need to go door-to-door to get their money, but a young kid who was collecting a $1.50 a week, was required to do it.  Since I had an abusive father, I lacked confidence with adults, so if someone didn't answer their door a couple of times, I would get intimidated asking for 2 or 3 weeks pay.  A bill of $4.50 seemed enormous to me and I was scared to ask them, so I would often just eat it.  Maybe I only made 12 dollars that week, but at least I didn't have to deal with some possibly angry authority figure.

The thing I remember most about doing the job was how cold I would be delivering papers in the winter.  There were times where I was walking home in windchills below 0 degrees wondering if I would be losing a toe.  It was like I was on some expedition of Everest, except there was no great end result of reaching the summit.  My summit was getting home and getting to relive this ordeal the next day.  It blows my mind, now that I look back at it, that children were encouraged to do this.  It really irks me to think that many of the people who I would collect from would claim they didn't have the $1.50 or in cold weather would say "I'll go get it", then slam the door and make me freeze my sweet cheeks off while they putted around looking for their checkbook.

There was a silver lining, though. This job allowed me to buy sports books and sports cards with the money my parents didn't make me put in a weekly savings for college. (NOTE: The couple thousand bucks I was able to save during my time doing this gig was taken out by my legal guardian, my Dad, who used it on a private investigator to try to find me and Mom, when we finally left and did are own version of witness protection.  I can't pretend that during the 8 years I spent paying off my student loans I didn't think about this with some bitterness. Now back to the silver lining.)  I had quite a collection of cards, which were my most treasured possession.  I considered using a baseball card to get me into this writing exercise, but I thought it seemed kind of gimmicky.  Really, who would want to read such a self-absorbed concept?

I also would occasionally buy wacky packages.  Since I loved Cracked magazine (better than Mad magazine to my young brain), the wacky packages were a perfect extension.  I decided to use the Gadzooka offering here, because I was a serious bubble gum freak.  While I loved Hubba Bubba and thought that watermelon Bubblicious was the bomb, the greatest gum was Grape Bubble Yum. Just the smell of it would make my mouth water like I was Amy Winehouse at a meth trailer.

Since I was not exactly flush with cash, but needed to fill my addiction to sugary nuggets of gum, I would buy a couple of packs on my way to school and then sell each piece to other students who weren't as industrious.  Grape Bubble Yum

and Orange Hubba Bubba seemed to be the most popular.  I'm not afraid to tell you that I did pretty, pretty well pushing my product on the 7th graders at Berg Junior High.  After che

wing so much, I became pretty adept at blowing bubbles, as well.  I was no Kurt Bevaqua, but I could hold my own against most.  Well, that is about all I have for now. Stay tuned for when I tackle Crust Toothpaste or Minute Lice.
Comments
1.   Josh Wilker
"I considered using a baseball card to get me into this writing exercise, but I thought it seemed kind of gimmicky. Really, who would want to read such a self-absorbed concept?"

Great story. That was one sad and hilarious moped.

Three more opinions: 1. Photos of those motorbike twins can never be shown enough. 2. Hubba Bubba was a little too rubbery. 3. Cracked had one feature that I loved when I was edging into puberty: reports from a busty Loni Andersonesque TV journalist; I forget her name but she was hot.

3.   jgpyke
Best writeup of having a paper route ever. I, too, had one--evening paper, collecting, the full shebang. Great stuff.

Good money for a kid, too. For a while, my brother and I split the route: he delivered weekdays and I did Sundays and collected. Not bad, really.

We had routes all over our neighborhood until we reached the holy grail: a four-block route that included our own and went in a loop. All of the routes were weird, though, because this was back when mailboxes were on your house, not out at the street. And everybody wanted their paper put in a different spot (esp. old people, which was most of our neighborhood). In the mailbox. Between the screen door and door. On the front porch. Inside the back porch. Inside on the kitchen table. Etc. Subbing for someone else's route or having a sub meant there had to be a legend written up to keep everyone's delivery specs straight.

I learned some of my earliest sociological lessons from that route. Old people didn't tip. Rich people tipped poorly. The one blue collar guy with the family and in the least position to tip, did so, and did so well.

Nobody has evening papers. And adults deliver it now. Odd.

4.   jjf3
I absolutely loved wacky packs. The fake company names, and the silly marketing claims on them, definitely affected my entire view of advertising in our consumer society...as much as I love Cardboard Gods, I wouldn't have a problem with a series based on those silly stickers...

5.   Scott Long
Interesting you mention the way a paper was to be delivered. I had forgotten about it.

My dad told me just rubber band the papers and throw them on the porch. (There was no slot by the mailbox like we have today). I did this and I caught holy hell. I was told that I had to throw them in the screen doors. There was one woman who used to call the office if I didn't throw the paper in a motion in the screen door that kept the advertising contents from flying out of the paper. I'm not kidding. Maddening.

6.   Ian Capilouto
I too was one of the last paperboys. I delivered the last afternoon paper for the Los Angeles Times before it was canceled along with my first job. I can remember getting that overstuffed bag of newspapers going only to fall over frontwards a block later. I remember folding newspapers on my porch, seeing the photos of the LA riots on the front page, and then looking up to see the real actual black smoke coming from them. Pretty surreal. And then the pricks who felt it was cool to rip off a ten year old....I would tell my mom and she would storm over there and give them an earful. Most people were good about it though and I got my share of cookies, ice cream and dollar tips. Nice story man. Us paperboys hold a common bond that has disappeared into American history.