Get Your I Survived George W. Bush T-Shirts
by Scott Long

Even John McCain is saying that he's no Dubya, so the one thing that we can all agree on is that Bush has done his damndest to wreck this great country. What better way to demonstrate your Patriotic nature than with this new Scott Long t-shirt creation. Wear it to the polls on November 4th. Remember it does make a great Xmas Present. Just $15 dollars (plus $4 S&H). Operators are Standing By Now! 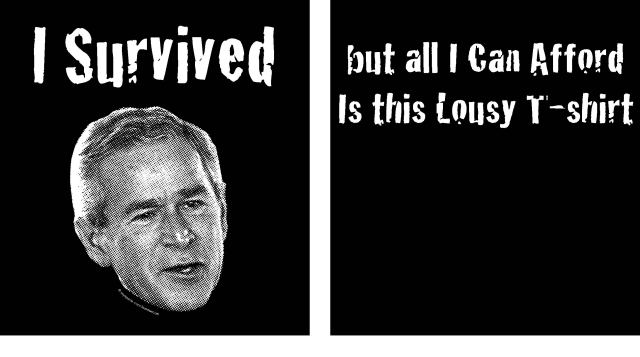 Comments
1.   Scott Long
I have had some difficulties getting the paypal to show different quantity levels, so if you want more than one shirt, you need to do it in separate orders. Email me at scott@scottlongonline.com and I will throw-in a free cd or a copy of my book "Dysfunctional Thoughts of a 21st Century Man" for every order of 2 or more.

2.   Xeifrank
Oh great, this post is back? I thought it got deleted by moderators. Too bad it was Bronx Banter that the Toaster lost.
Xei

3.   Eric Enders
I guess the "vr" would have been a stretch there.

4.   chris in illinois
2 You read and then posted on a blog you dislike?? How lonely are you, anyway?

5.   Eric Enders
Anyway, it's too bad this post knocked Will's off the sidebar, because it would have been interesting to see more answers to his question.

6.   ToyCannon
With estimates of over 1/2 million casualties in the Iraq War the shirt is no laughing matter for non Americans.

7.   Will Carroll
While "I'm Will Carroll and I approve this message" I would also check to see if your state (like Indiana) has a "no electioneering" law. Wearing this, or even a button, to the polls in Indiana will get you sent away.

Tho seeing the sign when I early voted put the Radiohead song in my head. That was cool.

8.   Scott Long
I wore it today for early voting and the polling guy asked me to turn it inside out. Personally, I like McCain and would have voted for him in 2000 and 2004, but Bush has sent things so far over the edge that we need to pull away from the absolute free market principles that he has allowed.

To give you an idea of my voting choices, there wasn't one possible democrat to vote for in a local judge position. I also got some dirty looks in line with my shirt, but I did have a couple other people ask me where they could buy one.

Scott Long----Bringing Art and Commerce to Our Lives!

9.   Scott Long
Oh and let me add. I don't think this post had anything to do with Bronx Banter leaving. It would be interesting that a blog written by a couple of Indiana guys would drive a few New Torkers away because of our writing being too liberal.

Bush was a disaster. The sooner you realize that (and your party) the sooner the Republicans will have a chance to rebuild their house which is in shambles.

10.   Eric Enders
In 2004 I wore a shirt to the polls that had a picture of Bush with the caption "American Terrorist." I got a lot of dirty looks but I wasn't turned away.

11.   jgpyke
the absolute free market principles that [Bush] has allowed

LOL! Good one, Scott! Ever the comedian...

I would hardly call the last eight years a fiscal libertarian's utopia--in fact, I'd be hard pressed to find much "deregulation," either.

"Scott Long - Doing his best to promote Socialism in America."

In 2004 I wore a shirt to the polls that had a picture of Bush with the caption "American Terrorist."

Thats just terrible. The US is protecting & promoting freedom around the world (the same freedom that allows you to wear a shirt like that), and this is how you pay respect? Are you serious? Even if you dont like the President, wearing something like that is just plain wrong.

Bush was a disaster. The sooner you realize that (and your party) the sooner the Republicans will have a chance to rebuild their house which is in shambles.

He was strong on the War on Terror. He got it right when he dumped Rumsfeld, kept with the surge even though most of America was against it. Now thats been proven to be an overwhelming success. He also passed tax cuts (and I dont know anyone that would rather pay more to the govt rather than just keep the money they earn). Made good supreme court nominees (Harriet Myers exempt).

As for his bad---> his moves with buying out the banks have been awful. His spending has been awful.

Bush has hurt the conservative movement in the last two years. I doubt it will take long for it to resume since Obama's presidency is going to mirror Jimmy Carters. Whoever the Reagan of 2012 is yet to be determined, but there'll be someone emerge.

14.   JoeyP
Your shirt would be a good seller with Al- Qaeda & all Islamo-fascists.

15.   chris in illinois
13 ...kept with the surge even though most of America was against it. Now thats been proven to be an overwhelming success."

So when is my cousin coming home??

16.   nofatmike
While I'm no fan of Bush, if anyone think's that he and the Republican Party are the lone, main culprits behind the financial crisis they are fooling themselves. In fact, Obama played a role in promoting Fannie Mae's risky banking practices long before he became senator, and even now has the former CEO of Fannie Mae as one of his advisors.

17.   JoeyP
15- I'm not sure. But victory doesnt mean that America will just get up and leave altogether.

America will have bases in Iraq for probably forever, just like it has bases in Germany, the Philippines, South Korea, etc.

Um, should I have called BS on the cardiologist who did my dad's bypass surgery when he said it was a success, even though my dad couldn't actually go home five minutes after surgery was over?

You should change your moniker to "chris the strawman-maker"...kinda like Joe the Plumber.

20.   Eric Enders
13 While an argument could be made that Bush is a war criminal, and indeed more of a terrorist than most of the people being held at Guantanamo, that's not really why I wore the shirt. Mostly I did it to scandalize, well, people like you. And all the blue-haired conservative old ladies in the small town where I lived at the time.

You seem really pissed off at my not "paying respect" to Bush, but it's not my duty or obligation as a citizen to pay even a smidgen of respect to a man who defiled our country worse than any other person in its history. Obviously, your mileage may vary.

21.   JoeyP
While an argument could be made that Bush is a war criminal, and indeed more of a terrorist than most of the people being held at Guantanamo

No argument can be made for that.

I think all POTUS should at least be respected and at the very least not outwardly disrespected. You wearing that shirt is just as bad as people that wear Obama Curious George shirts, probably worse. The most ironic thing is that you're probably wearing that shirt bc of the war in Iraq, but the war in Iraq is bringing about freedom to those that would never in a million years even be allowed to wear a shirt that expressed such disgusting "political dissent".

Hyperbole much?
The socialist-communist, protectionist far left have a very warped perception of the world and its very scary that one of their own could be in the White House soon, with Pelosi/Reid running congress.

22.   Eric Enders
"but the war in Iraq is bringing about freedom"

At least you gave me my morning chuckle. Thanks.

18 I didn't realize you guys were using "success" in the Orwellian sense, sorry.

24.   ToyCannon
Freedom from breathing is something I guess.

It would be interesting to see what the Iraq people think since it is their country that has been transfigured. With only their heart to vote would they rather have back 1/2 million casualties and a tyrant, or a broken country dependent on the US Surge to make their country safe enough to walk the streets.

I'd have been all over helping the Iraq people gain their freedom in much the same way France helped us but never will I agree that invading Iraq was the correct move. I'm sure if they knew they were going to have 1/2 million casulties in an American invasion they would rather have done the dirty deed themselves in the 1st place.

What does Saddam Hussein and Elvis Presley have in common?

Answer - They are more popular dead than alive.

26.   JoeyP
24-
I think people will always choose freedom over tyranny no matter the cost.

While I dont believe in nation building per-se, there were certainly many reasons outside of just freeing a group that were appropriate for liberating Iraq. #1 being IMO having a strong ally in the region in order to keep Iran in check.

27.   Scott Long
I am socialist because I think Bush was a terrible president. Hmmm.. I am the person who has said before that if McCain would have been the Republican candidate in 2000 or 2004, I would have voted for him. Ohhh...

Joey, it is really time for you to reconsider who you decide to thrown the whole socialist slam towards. As long as we don't have a flat tax or national sales tax, all parties budgets are socialist to a certain extent. I am concerned that an all democratic party government will continue the spending albatross we currently have around our necks. Of course, the biggest explosion happened under a republican party controlled system.

I wish I had more time to deal with your attacks on me, but I'm busy living in the suburbs, taking care of my family and trying to raise my children with moral values. I hope they don't find out I'm a socialist.