Cooking For Guys: Steak
by Will Carroll

There's nothing like a big, juicy steak. Sure, it makes a lot of sense to go vegetarian, but when you see a thick, dry-aged, bone-in rib steak at the butcher shop, you just have to buy it.

Like this one that I got from The Goose. 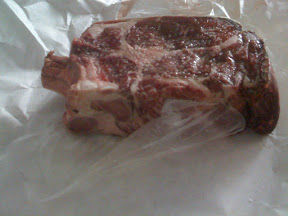 So now that you've found the perfect steak (and it is), you have to cook it right to make it worthwhile. Steak is simple to cook (grill it to the proper temperature) but difficult to get right. Even tougher is to cook it right and season it right, so let's do a very simple dry rub.

Get some ground coffee (dark roast), some paprika, and salt and pepper. That's all stuff you should have around anyway. You can sub in ancho chile if you prefer it to paprika. You'll also need to preheat the oven to 425 -- it's raining, so we're not doing this one on the grill -- and get two cups of mojito. You can use the pre-made mixes available everywhere, but the citrus and mint is going to help flavor the steak while it cooks.

Mix the dry ingredients (coffee, paprika, S&P) and just rub them on the steak. Leave it sitting on the counter until the meat is 'room temperature' or at least not cool to the touch. Rub it only on one side. You have a good piece of meat, so there's no need to completely cover that up. The rub will just enhance it, so one side is enough. 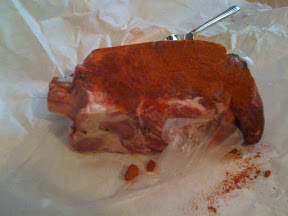 Now you want to crust the steak. Heat up a pan really hot with just a bit of oil. Put the steak in, rub-side down and let it go for three or four minutes. You don't want to cook the meat, just crust it, so as you see the side of the meat start to brown, you're done.

Take the steak and place it rub-side up (now a nice crust that looks like this): 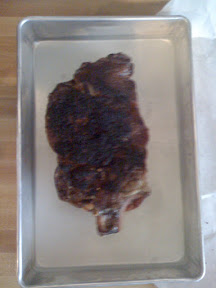 into a pan with about a half-inch of the mojito. Place the meat thermometer in, put the steak in the oven and go do something. Don't look at it until it gets to the desired temperature. Yes, this means you need a thermometer that has an alert, so go to Target and buy one for twenty bucks. You need it for the grill anyway.

Once done, it will look like this, assuming you also cook to medium:

(Picture didn't come out and by the time I realized it, the steak was eaten!)

But you're not done. You're not satisfied with just cooking it properly, you want to make it look great as well. Yes, it looks pretty darn good as is, but if you head to a high end steakhouse, they make it look better, don't they? Since we're using a bone-in rib steak, you have a couple choices once the steak has rested about five minutes. The first is to do the more complex butterfly style, leaving the strips attached to the bone. If you've got enough knife-fu to pull this off, it's the best

If you don't, a simpler thin slice will look phenomenal and not quite as intimidating to your lady friend. Cut away the bone, then slice it to quarter to half inch thick slices. It looks better if they're even, but it doesn't have to be perfect. Lay these slices over a bed of fresh greens and you, my friend, are golden.

Of course, if you don't have greens, you can just plate it and go! You can thank me later, after you chew.

Some people will look at me funny when I tell them to put in the thermometer and walk away. I do the same thing with my grill, in large part because I have a Holland Grill. It's a very different breed of cat which you'll either love or hate. Because of how it cooks, you can do things on it that you can't with other grills, like cook bacon. There are some things it doesn't do well too, like burgers (it's bad at them) and steaks (you have to get used to it.)

If you're one of those guys who has a "Grillmaster" t-shirt or a set of BBQ tongs that come in an aluminum case, you probably enjoy standing there watching the stuff cook and turning things, poking them, flipping them, dealing with charcoal, or whatever. I don't. I'd rather put the stuff on, grab a beer, and do something else, like talk to people or watch a ballgame, but to each their own.

Comments
1.   rilkefan
"Once done, it will look like this, assuming you also cook to medium"

To me this translates as, "As you can see, I like to steamroll my steak over a thick layer of salted glass shards", but the rest sounds interesting.

The rest sounds good. I always use the grill, though. Even if it's raining.

3.   jgpyke
If you can master the art of a seared steak in a cast iron skillet, that's all you need. No marinades, no coffee grounds, no oven, no BS.

And I gotta agree with rilkefan. "Medium" means, "I destroyed a perfectly good piece of meat." And in this case, an expensive one, too. Did you put ketchup on it, too?

4.   Will Carroll
Vegetarian or rare, Rilke?

And yes, the alcohol mostly burns off, but it works well with a thicker cut.

5.   rilkefan
Rare - life would be too short to be a vegetarian crusader against meat blogging.

I guess your technique would work for making a rare steak, maybe with a shorter sear - I'll give it a shot some day. (As if I got to cook steak since I married an otherwise perfect woman who thinks the char should start at one side and end on the other.)