Thoughts on Carlin (More to Come)
by Scott Long 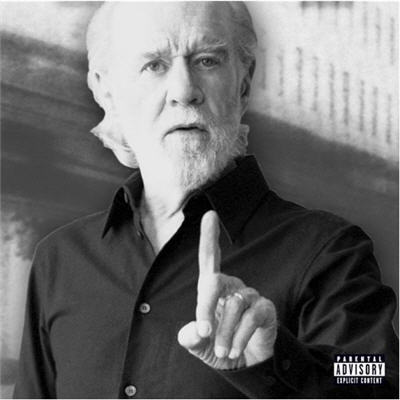 Since I reached my teenage years, I have been wary of having any type of idol worship. My guess is that George Carlin would have been of this mindset, as well. The coincidence in the equation is that the closest thing I have had since my conversion to Kill Your Idols to an exception to the rule is George Carlin. I will weigh in on him in much further detail when I have some time on Wednesday. Until then, I suggest you check out this piece from one of my absolutely favorite regulars here at the Toaster, Chyll Will. Oh and if you haven't done it yet, I also highly suggest you check out Alex Belth's thoughts on Carlin, as well.

Comments
1.   Chyll Will
An interesting thought; Carlin's comedy borders on private stock and private stash. Much of the body of his material over his entire career would be considered subversive enough to slap a "Keep Out Of Reach of Children" label on it, but naturally children like myself and many others, would infiltrate our elders' collection and surreptitiously listen to his routines; losing innocence, but gaining important perspective on how the adult world really works.

You can also say that Carlin is like a gateway drug to harder stuff (Redd Foxx comes to mind) that your parents would definitely not want you finding out about. In that regard, I find a strong measure of pride in the fact that as I was growing up, my family would sit together and watch his HBO specials in the context of "family fare." Now that's what I call parental guidance.

Carlin open my eyes and stretched my imagination. To this day, whenever someone asks me how I'm doing, I respond "relatively decent", or if I'm feeling particularly jaunty, "I'm not unwell." His latter-day material was laced with bitterness and resent for the age we lived in, but that I consider a measure of the sharpness of his mind; a man who continually observed our society's changing paces and warned us of trouble ahead. With that said, a true measure of his impact is not by what he said, but what others have and will say about him now that he's gone; which, I'm sure he wouldn't care less about. Let us have our fun, George; it's the best way for us to realize and accept that we have lost you from our midst, but we'll never lose you from our selves.

2.   jgpyke
I think what set apart Carlin, for me, was that he was the best wordsmith in the game. Even when he was "political" or doing "social commentary," he'd come at it from the words-being-used angle. Like in Class Clown, he made some Vietnam references, but the nugget of humor was how we didn't want to "pull out" of the war, because it didn't sound "manly." There are many more (and better) examples, of course. But that's what I appreciated, even from an early age.

3.   underdog
Carlin's saluted on NPR's Fresh Air today if you're interested. Repeated later and available online soon. (Rerun of a few different interviews plus some comedy clips.) Bless him for his work, for his influence, for making me laugh a thousand times and may he rest in peace, may he be making people laugh in comedy club in heaven somewhere.

4.   Scott Long
I like the overall sentiment, but I have a hard time imagining Carlin embracing a trip to Heaven. I will have to download NPR later.

5.   misterjohnny
While I really liked his earlier material, the past few years his routines seemed more like a bitter old man. RIP though.

6.   underdog
4 True! How about a comedy club in the afterlife? A bar in purgatory?

It reminded me of these two quotes from him, though: "I'm completely in favor of the separation of Church and State. My idea is that these two institutions screw us up enough on their own, so both of them together is certain death."

"I'm not concerned about all hell breaking loose, but that a PART of hell will break loose... it'll be much harder to detect."

Was interesting to hear his anecdotes on Fresh Air about the fairly progressive Catholic School he went to, and the former Nun who taught there who was a follower of his comedy years later. And who brought some of the less progressive members of the school/church with her to one show, which made him nervous. He was respectful enough to tweak his act a bit that night because he didn't want to make them uncomfortable.

7.   JasonO
Carlin was surely a giant of comedy. While his politics were pretty garden-variety 60's radical/progressive, I recall his statement some time ago that fascism in the United States (I'm paraphrasing here) would not come via brown shirts and jack boots, but rather via Nike sneakers, "all smiley-smiley"...holy shit was he dead-on correct.

8.   jgpyke
7 What you describe was the basis for the cover art and intro to the recent NYT #1 bestseller, Liberal Fascism.

9.   JasonO
The point being that Carlin did not abandon the first amendment for the sake of political expediency, as has been the case for the last 15 or so years across the political spectrum. I saw several HBO specials in which he hammered attempts to indict freedom of thought, whether it be "hate speech" or "freedom fries." I disagreed with his politics, but I always admired his conviction on this critical point.

11.   Greg Brock
Carlin and Robert Klein HBO specials were the greatest introduction to stand up comedy a kid could ever have. I'm not as sad as I am unbelievably grateful for having him.

I wish we could have had Bill Hicks for this long.

# Think of how stupid the average person is, and realize half of them are stupider than that.

# I think it's the duty of the comedian to find out where the line is drawn and cross it deliberately.

# The only good thing ever to come out of religion was the music.

# Religion convinced the world that there's an invisible man in the sky who watches everything you do. And there's 10 things he doesn't want you to do or else you'll go to a burning place with a lake of fire until the end of eternity. But he loves you! ...And he needs money! He's all powerful, but he can't handle money!