Pitching For the Presidency
by Will Carroll

John McCain is a Diamondbacks fan, but due to his shoulder injuries, he's not much for first pitches, needing a special 20 foot rubber when he threw out the pitch last time the Dbacks were in the Series. 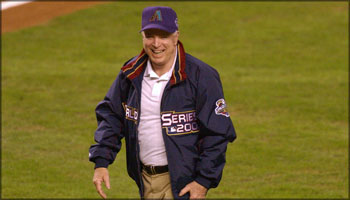 Then again, Scott's loving the idea of a White Sox President.

Wow, looks like he is a real lefty, but his mechanics in pitching aren't much better than bowling.

And let's not forget the lovable loser:

Ok, not so lovable, I guess.

This pic is even more interesting: